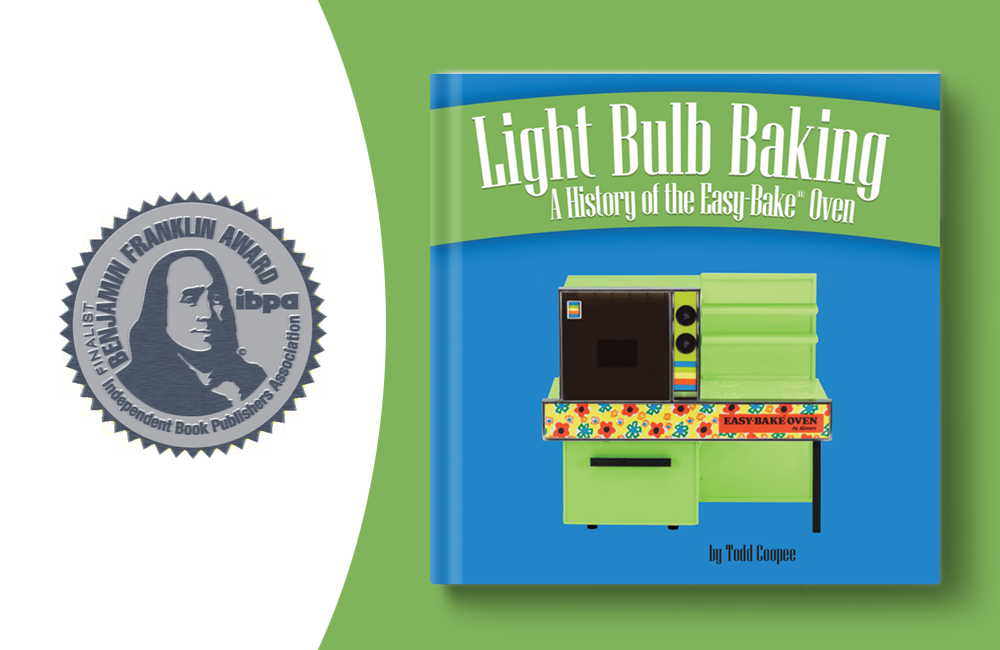 April 30, 2014—Ottawa, Ontario, Canada—Todd Coopee’s 2013 retrospective, Light Bulb Baking: A History of the Easy-Bake® Oven, continues to garner recognition and praise for its visual history of the pop culture icon.

Released in 2013, Light Bulb Baking celebrates the toy’s journey from children’s toy to pop culture icon and inductee to The National Toy Hall of Fame. The book explores the innovation, history, economics, commerce, advertising, and marketing behind the toy’s 50-year history. It includes what is likely the first and only complete visual history of the Easy-Bake Oven, including stunning photographs of every model of the toy, its colour palettes, features, and its many accessories.

“I’m honoured to be recognized by IBPA in the Best New Voice (non-fiction) category for Light Bulb Baking”, says Coopee. “What began as a personal research project evolved into something much further reaching. The toy oven played a significant role in the lives of many people and the book has been enthusiastically received. It’s great to see so much interest still exists for the Easy-Bake Oven.”

A must-read for vintage toy collectors, nostalgia buffs, and foodies, Light Bulb Baking: A History of the Easy-Bake® Oven is available in hardcover, paperback, and eBook formats at online retailers such as amazon.com, amazon.ca, barnesandnoble.com, chapters.indigo.ca as well as Coopee’s website: toytales.ca.

About Todd Coopee
Todd Coopee is a toy historian and author.

Through his writing and speaking, Todd takes audiences on a journey of celebration and appreciation of the objects that inspired curiosity, thought, experimentation, and wonder during the formative years of popular culture development in North America.

Todd is an engaging speaker and writer with a focus on toys, nostalgia, and collecting. He writes and curates the blog, Toy Tales, and is owner of Sonderho Press, a boutique publishing company.

Todd lives in Ottawa, Ontario and is available for media interviews.